clearing other people’s energy from your body in 5 minutes 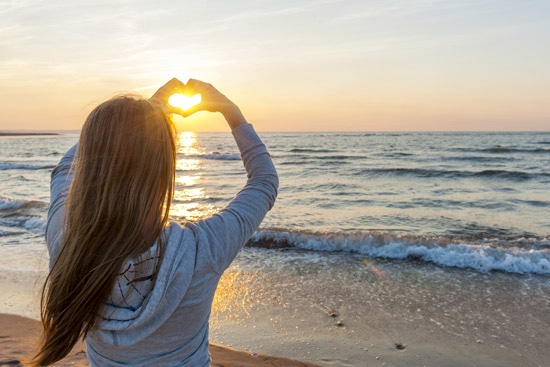 Are you sensitive to what other people are feeling? Me too.

I have a habit of being like a sponge–not just aware of, but actually absorbing what’s happening in other people’s bodies and emotions. It works great for life coaching and yoga. But it’s not so great when I can’t clear it afterwards. This exercise for clearing other people’s…stuff…works wonders for me and I hope it does for you, too.

How do you know you’re carrying stuff from other people?

I’m using the term stuff here because energy seems too vague. Stuff includes: emotions, physical sensations, thoughts and energy. In the instant I notice somebody has shifted from feeling one way to the next I recognize that I realized that because I felt it in my body. For me, physical sensation is my first and foremost sign that I’ve picked something up.

I know I’m still carrying it when it I feel what I call “Jangly.” It’s like there’s a mini electrical storm covering the surface of my body. It’s a layer of edginess that makes me feel tense, like I want to wear armor. Beneath that layer, I start to shield up–to tense everywhere.

In my experience, most people feel a bit jangly when they’re carrying other people’s stuff. It’s the opposite of peace, grounded and strong. It pulls you out of your center and you feel distracted by the discomfort on your surface.

How do we feel other people’s stuff?

This is basically an extension of the reaction we feel when we actually see something happen to someone else or somebody do something else. We see someone stub their toe, and we flinch. Or we see someone drink something sour and our stomach clenches. Scientists credit mirror neurons in our brain for this response. For those of us who feel without even seeing…well, maybe we’ve got super mirror neurons.

How do we clear other people’s stuff?

Honestly, I don’t know why this works. I just know it does. I’ve shared it with so many people after learning it from my friend Carol and every single one says it works for them.

1. Envision a rose. It’s hovering out in front of you…maybe a couple feet away. In your mind’s eye, you see it.

2. Notice that the rose has the power of the most powerful vaccuum you’ve ever experienced. Maybe James Dyson had something to do with it.

3. See the rose vacuuming up the stuff that’s on the surface of your self. If it helps, give the stuff a colour and see it being sucked from your body and into the rose. The rose is infinitely capable of receiving every bit of stuff. It never gets full. Move the rose around if you need to–get it into the areas you feel the most jangly.

4. Once you feel completely jangly-free, blow up the rose. I literally envision exploding the rose out in front of me, and the bits and pieces being absorbed up into the sky.

5. I say a little invocation: “I’m releasing this back to where it belongs. It’s not mine and it doesn’t serve anybody for me to carry it.”

Some people don’t like to blow up the rose. They want to imagine the petals drifting away one by one, or bury the rose in the earth. I like exploding it. Back off, sucka, I got things to do in this world.

My husband, Matt, and I were in Victoria, BC once. We had just done a yoga class and were walking back to our car. Beside us on a sidewalk was a young guy, probably in his late teens. He was drooping, loopy, drug-addled and bruised. He was being led into a police car by two gentle officers who knew him by name and treated him with care.

I wanted to help him. So I did what I’d always done. I thought: “Maybe if I can feel what he’s feeling, I can take some of it to ease his pain.” I sent part of myself over there–reaching out with my energy body to try to feel what he was feeling. It landed in my stomach like a cannon ball.

Matt turned to cup my shoulders as I doubled over on the sidewalk. It hurt to breath. It hurt to move. I started to cry. My mouth opened wide but nothing came out.

He looked me in the eye and said what I’d never heard: “It’s not yours. Let it go. Don’t carry it.” And moved me down the sidewalk.

I spent a couple hours trying to clear it, and eventually I did. It’d have been faster if I had the rose. And I didn’t heal that guy. Because we can’t heal other people by taking their pain from them.

We heal by healing ourselves and helping other people do the same.

So I explode that sucka.

You can do whatever you like with it–but please don’t carry it around.

I use owaves.com wellness planner app to remind me to set time out of my day to meditate and detox my system. you should check it out, I live by it. owaves.com!

I never comment on posts, even when I find them useful, but this deserves one. I’m a massage therapist who struggles with taking on energy that isn’t mine, and while I’ve been getting better at not allowing stuff to get into me in the first place, I haven’t found a technique that works for me in clearing it once I’ve got it – until now. The rose vacuum worked like nothing else has before, and I only did it for a minute. Thank you so much for sharing this. And I like what else you had to say about trying to help other people by taking on their pain – you’re right, it doesn’t benefit either party; each individual has to heal themselves, and as a massage therapist that’s what I aim for when I work with my clients: providing loving encouragement through my hands and words to empower my clients to heal themselves. In the end, I know it’s their actions which provide them with the highest and longest-lasting healing.
Thank you again.

I’m also a massage therapist who has client’s with this energy. I have found walking barefoot in the grass and swinging my hands from side to side or shaking my fingers and widening my toes to get it off has worked for me. Good luck.

It does work. My ex-girlfriend had what I call snake energy. She even would hiss at times. I can still feel it within my heart. I envisioned the rose and without due a snake came and wrapped around it. I could not explode it, but It turned to stone. Will do more of this with breathing excersices and meditation. Thanks you!

I would also not be a commenter but feel compelled to share as I loved the post and really relate to that trying to help others with their pain. I am a writer and people tell me their stories, usually unasked, because they sense I will listen to them. In the past I struggled not to take on their stuff.

I went to a bio energist who told me before her day begins, she pictures a hard boiled egg cut in half. She scoops out all the yolk and gets into the bottom half of the egg. Then she showers herself in rainbow (chakra) colours and puts the top of the egg on, sealing herself in before she begins her day of healing.

The egg is porous enough that she can connect and have empathy with her clients but their energy can’t get through to blend with hers.

nice, it worked instantly, thank you!

I have a bit problem with taking on others energy from being a scapegoat in a multiple narc family… we are trained to be dumping grounds and accept the neg energies of narcs that cant accept their own worthlessness or anything else negative they create..
I have loads of techniques and havent come across this one and is a good method which helped and i love roses! so thank you !!..
i also just recently realised my spirit is disconnected from my body, which allows things to get in…
this can be easily corrected as per Bradley Nelsons Body Code..
wil a magnet or hand rolled over the governing meridian.. or top of the head.. Great system for all those having health or emotional issues..
Namaste!

Lovely article it was very well needed and I will use all of you techniques..

This is amazingly helpful! I feel other people’s energy and pick up on their thoughts when they are just thinking about me! They could be on the other side of the world and I can begin to identify this. I’m going to give this meditation a go -thank you! It was amazing to read someone who has the same experience.

This is the sort of thing I need, but I went to do it and could not. The reason seems to be that I associate a rose with my sister who committed suicide a number of years back, and so if I move ‘stuff’ to a rose it feels like I’m moving it to her… I guess I just need to think of a substitute for the rose, and it will work just the same!

You can reach him through His [ Robinson.buckler ] on Google search…………….

I was able to bring my ex lover back With the help Robinson.buckler…

I used herbal Med from him to cure herpes,,,,

You could also get cured too ..if you need help you can find his contact with His Name on Google ((Robinson.buckler))

When I tell you this works I mean it,I felt free from everything after doing this!!

What a great article. I actually just came to the realization that I do this in relationships. I take on my partners negative energy to try and support them without realizing they are sucking the energy right out of me. None of the negativity I feel comes from anything that has to do with me but is theirs. I’m looking forward to detoxing my soul and trying the rose technique!

to my mom on mother's day. the story of when I lost my job, my boyfriend and my apartment
Previous Article
tell your story. set yourself free.
Next Article