to my mom on mother’s day. the story of when I lost my job, my boyfriend and my apartment 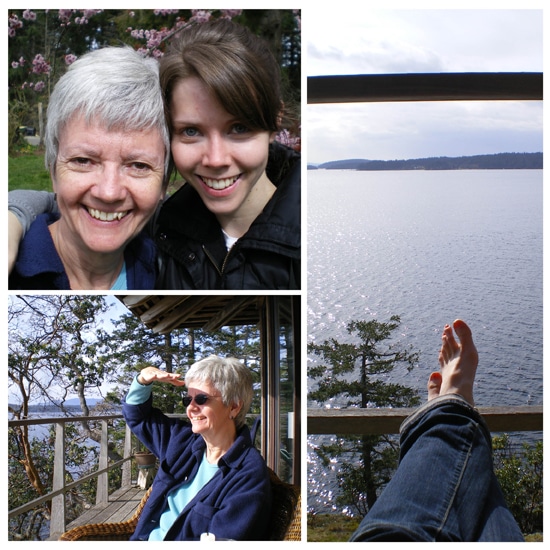 Propped up on the railing of the deck with the rest of her reclined in a lounge chair, my mom’s feet and mine were the only thing between us and the never-ending ocean. We’d been that way for hours—just watching. “I’m going to sit here until I see a whale,” she said, and sipped her drink.

I remember looking at our feet. Probably because it was so unusual to see my mom without socks. But there were her toes, pink and tiny—smaller than I’d expected. Compared to mine, my mom’s feet were smoother, wider, and softer.

And I remember seeing my mom truly relaxed. Her shoulders dropped away from her ears; her chest rose and fell with an even, steady breath; and her cheeks were rosy from the wine. Behind us was the suite we’d rented in a bed and breakfast on Salt Spring Island on the Canadian Pacific Coast. In front was more ocean than either of us had ever seen. Nothing interrupted it.

We were on the first trip we’d ever taken just the two of us. When I picked her up from the train station she leapt into the car, grinning wide: “I’m excited.” I was stressed. Tense. Annoyed.

Why? I couldn’t tell her. It was too fresh, too unexpected, and too big of a let-down. I’d lost my job and didn’t have a plan. The small business I’d left my secure paycheck for in the hopes of fulfillment and freedom had decided the day before that they couldn’t afford to pay me any longer. “I was just looking at our bank account,” the woman I was working for told me with a cheery smile, “And it looks like as of now we can’t afford to pay you.” No “good luck.” No apologies. Nothing but a smile.

The trip was going on my credit card, and I was worrying about going broke. But, how to land that on my mom after all the worry she felt months ago—when I quit my job, ended my seven-year relationship, and moved into a dingy studio apartment. I felt she’d had enough to handle for a while.

Instead, I tried to be happy. We got up early in the mornings to sit on the deck and eat breakfast in the sun. We went for walks beneath the Douglas Fir, Red Cedar and Hemlock trees. Drove down windy dirt driveways to pick our way through tangled gardens in search of the shack that served as a shop for a local artist. We bought fresh goat’s cheese from Salt Spring Island Cheese Company. But mostly, we watched the ocean.

In every moment the ocean changes and yet remains the same. It’s always the ocean, always enormous, always the biggest body of water on our planet. And yet no square inch is ever always the same. I haven’t asked an oceanographer about this, but I believe it to be true. Because the ocean moves. Mammals and fish come and go. Tides rise and fall.

Within the confines of its expansive boundaries, the ocean changes and yet remains the same.
My mom knew something was up. Of course she did. Moms do. She’d look at me quizzically as I sat in silence over breakfast, or tip her head to the side when I stomped hurriedly down the garden path instead of relishing the adventure. But she just waited. Wondering.

And then, on our last day, during our last lunch, I told her. “Mom, I lost my job. I don’t know what I’m going to do.” Ah. She softened. Finally, something tangible instead of worries. “Oh sweetie. I wish you’d told me sooner.” We talked it through. She asked about everything. And paid for lunch.

After that I still worried, but something inside me knew: I’ll be ok. Because changes would come and go, the tides in my life would rise and fall, but I’d always be me. My mother’s daughter.

what does being free mean to you? walking to the rhythm of my own heartbeat
Previous Article
clearing other people's energy from your body in 5 minutes
Next Article