getting raw and exposed in this post. here’s a story about me you didn’t expect 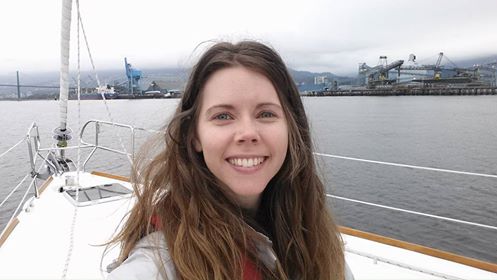 I’m going to let you in on a secret.

It might shock those of you who say to me, write to me, or just silently think “Lindsey’s really got it all together.” Let me tell you a story that’s true.

If you connect with me on Facebook or Instagram, you might know that I recently went on a five-day sailing trip with my husband and my in-laws. I posted a few pictures of some of the moments. Shots of me on the first day with my hair blowing in the wind, the gorgeous city we were sailing away from in the background. The shiny and spotless boat. Shots of me and Matt—my husband—with the other couple who sailed with us for a few days, smiling. And another one, of me leaping into the ocean, that’s sparkling in the sun.

All of those moments are true. They all happened.

And so did this one.

I’m good for about two hours of limited movement. For example, the kind of limited movement that happens on a sailboat where your options are to lay down or sit down if you’re not standing at the helm. At the two-hour mark I start to get cranky. I feel like my bones and muscles have started to fuse together like too much 80s hairspray—the kind I used to use to stick my bangs up like a wall at the front of my forehead.

Getting up to attempt to navigate my way to the bathroom requires a 10-minute period of calisthenics, to get my body functioning again. If I try to get to the bathroom without the 10-minutes of calisthenics, I flail around, usually slamming into the railing that I’m supposed to hold onto as I head down the ladder. The first day of sailing, I always get a baseball sized bruise on my hip.

At the three-hour mark, I start to go into shut-down mode. Like that Star Wars humanoid robot guy C-P30 when they take his battery out. At this point I give up on pretending to be a functional person and embrace a nap.

It’s at the four-hour mark that the biggest baddest transformation happens. If I wake up from my nap and we are still on the G.D. ocean, I start to lose it. I feel like a mini dictator has high jacked my brain. This mini dictator never speaks quietly. She only yells. And everything comes out as a demand. This mini dictator has never heard of being polite. She doesn’t give a crap about polite.

I try to reign her in. So that when my father-in-law asks me if I want to eat lunch before or after we stop in this bay my response can be “After would be great” instead of “I EAT LUNCH ON MY SCHEDULE! I’M NOT EATING LUNCH UNTIL I WANT TO EAT LUNCH! I MIGHT NEVER EAT LUNCH!” Note: this doesn’t always work.

This true story happened after EIGHT HOURS on the boat. Eight. Hours.

I was sitting on the deck at the bow of the boat when we rounded the corner. Note: I think the bow is the front of the boat; if you know all these boat terms, I salute you. The corner was the lead-up to the bay we would be spending the night in. I was so ready to get off that shiny, clean, G.D. boat. Eight. Hours.

We round the corner and I’m searching for my saviour—the dock we’ll be tying up to for the night. The dock is my drug. The dock instantly soothes my inner dictator. She goes from tyrant to teddy bear. At this time, it’s not unusual for me to start hugging people.

But around this particular corner, there is no dock. No. Dock. There is a bouey. Congratulations if you can say that word the way it’s supposed to be said. Good for you. A bouey is a big round ball attached to the bottom of the ocean. You tie onto it and…that’s it. You float. In the water. Surrounded by water. On your boat. Which you’ve been on for EIGHT HOURS.

My Inner Dictator Loses Her Marbles

My inner dictator lost her marbles. She went bat-dung crazy. Inside my head she was throwing furniture around. She kept on repeating the same thing over, and over, and over. I’ll paraphrase: it was “W.T.F.?!!!!”

I managed to hold that in. I held in that inner dictator through force of will until after dinner, when we finally got off the G.D. boat. Holding that inner dictator in took so much out of me that I went silent. I was worried about what would come out if I opened my mouth. So I only opened it to put food in.

What? This is How I Always Walk

After dinner, we got in the dingy and motored on over to the one dock that’s in that bay. The dock no boat other than a dingy is allowed to tie on to. And from that dock we went for a walk through a very beautiful garden. Note: ‘walk’ is the normal word for the abnormal way I move when I can finally get off the G.D. boat. I look like a cross between an Olympic speed-walker and someone with a kind of Tourettes that causes them to break into lunges. I lunge-Olympic-speed-walked around the garden.

Notice that twice now I’ve told you about the motoring dingy. That’s important for later.

Morning Will Save Me

We went to bed. The only thing that got my inner dictator to go to sleep was the promise of yoga on the one dock in the bay. The one no other boat other than a dingy could tie up to. In the morning, I told my inner dictator, we will get into that dingy and motor on over to the dock and do yoga in the early morning sun. It will be beautiful. It will save us.

The motor didn’t start. The crummy, useless, thoughtless dingy wouldn’t move. I sat in that dingy and my inner dictator’s rage nearly popped my eyeballs out. They started leaking tears. All was lost. It would be another hour after hour of not moving.

Then, I spotted them. The oars! The perfectly-designed, useful, thoughtful dingy had OARS. I stuck the oars into the holders. If you know the word for the things that hold the oars, good for you. Those oar-holders held those oars and I rowed my own self across the bay. I tied that dingy up to the one dock in this water. I climbed out. Spread out my yoga mat. Sat down in a cross-legged position. Settled my hands on my lap and started to focus on entering into that blissed out state where even my inner dictator is quiet.

Who is That Talking in My Head?

This is what I heard: “You can’t do yoga on this dock.” I ignored that voice. I’ve heard the self-judgey voice before. I ignore that voice.

I heard it again “You can’t do yoga on this dock.” NO, SELF-JUDGEY VOICE, I WILL NOT BE SWAYED. I AM DOING YOGA ON THIS DOCK!

“You can’t do yoga on this dock because we’re not open yet. If you want to do yoga, you can go somewhere else to do it.”

I opened my eyes. There was a girl, a teenager, in a garden uniform, standing at the end of my yoga mat. I squinted at her. I thought it might make her disappear. If I couldn’t see her.

She stayed standing at the end of my yoga mat, her radio crackling. My inner dictator was ready. She was primed. Oh boy, had she had it. So I didn’t open my mouth. I stood up, rolled up my yoga mat, untied the dingy, and got back in.

My Eyes Are Leaking

I rowed my way back into the middle of the bay. I pulled the oars in. And I cried. I cried until Matt called out to me from the boat to see if I was ok.

But then we got to the marina at Salt Spring Island. And we tied up at the dock. And I’d spent so much energy trying to keep my inner dictator contained that I knew if I didn’t get off that boat immediately she would take someone out. I wouldn’t be able to stop her.

So I made a rapid plan. I would gather my laptop, my book, my cell phone. I would let everyone know I needed to go do some work, that I had to find Wi-Fi. And I would spend hours away from the boat. Away. From. The. Boat. I started to gather my stuff. I felt my inner dictator rising up as each second passed. I called out to Matt. I’d told him the plan, and now I wanted to warn him. I wanted to warn him that I needed to get off the boat very quickly, or my inner dictator would blow. I wanted to let him know it was urgent. He could be my first lieutenant.

I tried to get his attention. I tried to tell him it was coming, that I wouldn’t be able to stop it. I tried to warn him.

I put the final object into my back-back. Zipped the zipper. Closed the clasp. Felt my inner dictator pressing against my lips.

And then Matt called out to me “You can get Wi-Fi right here. Right on the boat.”

I Lose My Marbles

I stood at the bottom of the ladder leading up to where Matt stood with his parents and I yelled “I. HAVE. TO. GET. OFF. THIS. BOAT!!!!”

I don’t remember getting off. I don’t remember how I got up the ladder, who I pushed past, or how I navigated the leap from the boat to the dock. I do remember lunge-Olympic-speed-walking all the way out of the marina.

On Using Your Intuition in Your Business and Your Life
Previous Article
It Only Happens Twice A Year. 2.5 Hours of Coaching With Me
Next Article