chosen by a stallion. how to activate the power of presence 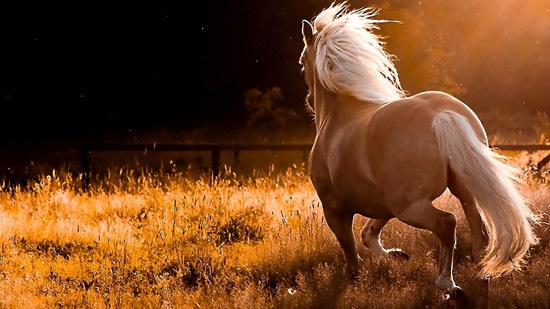 I could never possibly go for him. He’s too gorgeous, too tall, too dark and handsome.

That’s what I was thinking.

Even though the facilitator told us to choose the horse that we felt first drawn to, the one we noticed when we first arrived. Good gawd he was a gorgeous horse. A great big beauty of a beast, taller than all the rest and standing there like a stallion. I was in awe. And intimidated.

Standing on their Ground

We’d all arrived at Epona Rise Retreat Centre to experience what it was like to hang out with a herd in an environment as close to their natural one as it could possibly be. There were about fifteen of them, a few side by side, others on their own, one standing looking straight at us. We crossed the creek and entered the middle of their field, horses all around.

Many scientists say horses shouldn’t exist; they just don’t seem to have the natural defense system needed to have been around for as long as they have–longer than people. But horses have a wide and keen sense of their surroundings; they knew we were there before we even saw them.

We were in their space, not the other way around.

Learning how to Be

Before we approached a horse, we had to learn how to do it in a way that communicated we weren’t a predator, that we were already a friend, not a foe. That meant no beeline for their head, no rapid march right up to where they were standing–that’s what a cougar does when it’s going for the jugular. If we did that, they’d be gone.

So we were shown how to amble, how to arc our bodies, how to get just close enough that if they wanted to they could lift their head to meet our outstretched hand, but no closer than that. The final decision about whether or not we’d interact was theirs. If they lifted their head, we’d pat them a bit, and then walk away. If they didn’t? We’d walk away then, too.

Of course we were all dying to have them like us. They were beautiful.

I opted out of trying for the big dark gelding. I went for a small brown horse instead.

I arced, I ambled, I took my time. And then I reached out my hand. He lifted his head, took a sniff, and went back to eating. That was it. Ah, no big deal.

“Look at this,” the co-facilitator was smiling.

The big dark gelding was making his way straight for me. He stopped and looked at me. I looked at him. He was giant.

And then I was offering my hand, he was lifting his head, I was running my hand down the side of his neck, up to his back, around his ears, and I was crying. I don’t know why, I wasn’t expecting it.

But something happens when a great big beauty of a beast like that chooses you. There’s a heart-tugging humbling, a “who me?” kind of reaction that breaks down barriers and dissolves division.

He was so tall I had to almost fully extend my arm to reach up to scratch the top of his back. He loved it. Ears drawn back to listen, eyes watching. I was nervous. But when I softened my muscles and dropped out of my head, I relaxed. And he did, too. He was huge, so much stronger than me, way more powerful in terms of muscle and strength. But I was impacting his state by altering mine.

I closed my eyes, felt what I was feeling, and then what he was. “Now notice the area around you,” she said.

“I think he’s noticing that there are people over there.” I opened my eyes, the gelding and I both looked, and a man walked out from behind a building in the next farm over.

Later in the afternoon, when our group stood up from our circle to say goodbye to each other and leave the field, Rudy walked over. He touched my hand with his nose, snuffled my palm a bit, and then walked away. Like we were buddies, now.

I’d signed up for the workshop to test myself. To see if I could sustain the power of presence, a sense of peace and groundedness, while facing up to something I’d never done before. In all honesty, I think I managed to do it about twenty percent of the time; it was a whole new practice.

The Power of Presence

But in the moment when I dropped away from the whirl of thoughts and into a sense of steadiness the gelding did too. And I was reminded once again that what we experience within us is what we experience around us. And of our own innate power to shift things.

Experiment with energy shifts. If you notice the people around you are upset or in turmoil, or just tense, relax. Soften your muscles, take deep breaths, feel your feet on the ground. Think of something that helps you feel peaceful. And then just see, if you sustain it, what happens around you. This is the power of peace.

the power of a personal practice