I Am Not a Dancer, But I Will Dance 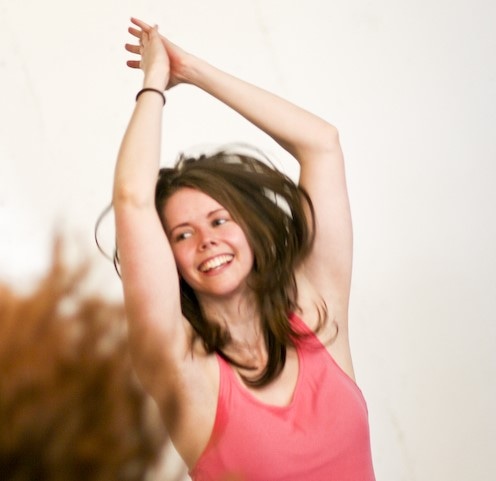 I am Uncoordinated and Envious

In high school I had good “friend” who was da bomb at dancing. I put “friend” in quotation marks so you know she wasn’t what I’d call a true friend these days—she was better at insults disguised as “I’m only telling you because I care” comments than she was at being a friend.

Da bomb doesn’t have ‘em. So you know she was better at dancing than she was at being a friend.

I’m gonna call her Anna. Anna had a reputation. At any party or get together, everyone knew that Anna would own the room. The girl had moves. She was sixteen years old and could werk werk werk like she was Rihanna. Which she did, nearly every time we got together.

I would watch Anna out of the corner of my eye from a corner of the room. I would think I wish I could dance like her.

I have always loved dancing.

I Wear My Kindergarten Tutu

When I was in Kindergarten my favourite thing to do before bed was to put on the white slip with tutu-esque crinoline one of my aunts had bought me and fling myself around the living room to one of my parents’ Beatles records. Mom and Dad would carefully hold a straight face behind their respective book and newspaper, occasionally peeking out to catch me spinning in circles or jumping up and down.

I am Uncoordinated and Dancing

I have a very distinct memory of being at a party in high school, deciding that once and for all I would not stand in the corner of the room watching but would instead stand a metre or so out from the wall, and dance.

I remember wondering if I was doing it right, if I looked anything like what I hoped I did. It was terrifying. It was exhilarating. I was loving it.

I heard a voice behind me. It was Anna.

And then she walked away.

I know you’ve had your own high school moments, or moments from later in life, that impacted you more than you wished they would. So it likely won’t surprise you to know that it was years before I tried dancing again.

About a year ago a friend of mine convinced me to be her wing woman in a ballet class. I’m going to call her M. M had done ballet as a kid, and wanted a buddy alongside her when she tested it out again. It was a beginner class. I was a whole new person compared to that kid in high school. I agreed.

If you have never taken a ballet class, let me explain something key to you: even beginner ballet is for experts. Most of the time, the teacher does not teach. She demonstrates what you’re going to do once, and then says ‘Your turn.’

And then she walks around the room adjusting arms and legs as the students navigate the sheer terror of trying to remember a combination of moves they have never seen while attempting to look like a ballerina in three different mirrors all the while coming across as more of a hippopotamus.

This is What Happens

This is what happened during me and M’s class: I got the giggles so badly that the teacher stopped in her around-the-room pacing to give me a stern school-marm glare that was so intimidating I was more impressed than cow-towed. I completed my first turn on one leg with the other gracefully raised behind me and both arms arranged just so—only to find I was facing the wrong way at the end of it.

And I was the only one facing the wrong way at the end of it. Also, I kicked the bar: twice. Which happens when you are using the wrong leg. Both times, the resounding clang rang out through the ballroom like a gong, causing all of the other students to stop and look. M could barely contain herself.

Despite it All, The Love Comes Back

So me and M went back. We signed up for the Beginner Series. And then we signed up again.

And eventually, I began to feel like I was getting it. Like there were moments in the midst of all the huffing and puffing where I actually did stop looking like a hippopotamus and for a split second looked and felt like a ballerina.

You Might Say I Got a Bit Too Confident

I started dancing at home while making dinner. I would put the radio on, get the food cooking, then clear out the ottoman from our living room, and—when a great song came on—I’d dance. Matt would come home from work to find me flinging myself around the living room, dinner burning on the stove. You can see that very thing happening here: in this video we made for a friend’s wedding. Cooking is also not my greatest forte.

Once Matt came in the door, I would usually race back to the kitchen, too self-conscious to let him see me.

But one day, I got there. I had done other dance classes—hip hop, contemporary, and burlesque—and got to the point where I felt like I got this. I got this dancing thing down.

So one night Matt and I were settling in for a cozy evening at home. The plan was to watch Netflix and relax. He was all set up on the couch: in his basketball shorts and t-shirt. I was all set up for joining him: in my sweatpants, tank top, long-sleeve shirt and sweater.

A song was playing in my head as I came up the stairs. And I was owning it; I was bopping my way into the living room, I was sliding across the hardwood floor, I was as graceful and as lithe as a real-deal dancer. I spun myself into a pirouette.

I lost my balance and tipped over.

Ricocheted off the ottoman.

And onto the floor.

I collapsed. Not from shame. In laughter.

I lay on the floor and laughed until I could hardly breathe. Through his laughter, Matt asked if I was ok.

And you know what?

I am not a dancer.

But I will still dance.

With love, and light ahead,

behind the scenes is another story. what really happened on that call
Previous Article
I may have taken my 'overcoming fear' self-challenges too far [video]
Next Article